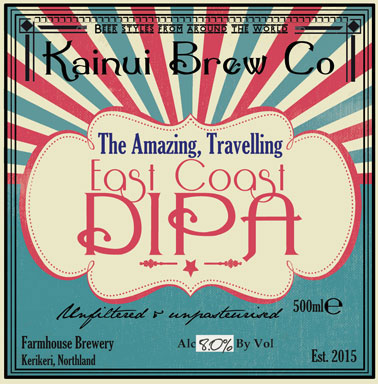 East coast IPA was a style initiated by Vermont’s ‘The Alchemist Brewery’. Their Heady Topper was rater the best beer in the world in 2013. This unfiltered 8% Double IPA set a new trend that quickly gathered pace. The style was encapsulated by a juicy, tropical fruit character, accentuated by a dry hop haze. It has less bitterness, pine and resin than its West Coast cousin and has since turned the tide with more and more East Coast styles gaining favour in today’s market.

A somersault for your palate, this beer is brwed with a blend of yearts that throw peach and tropical esters. Moderate bitterness is rounded out by our water profile and a large dose of aroma hops. Still hazy from a significant dry-hop, this ebeer is a showcase of delight and splendour. Coming to a town near you!