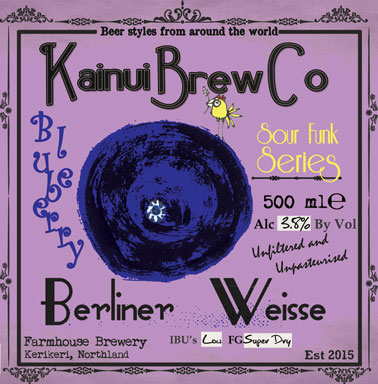 “The Champagne of the North” was how Christopher Columbus referred to Berliner Weisse. Once the most popular beer in Germany, this light, tart refreshing beer has been around since at least the late 1600’s. It has now fallen from favour in Germany with breweries producing this style falling from over 700 to a paltry few. The craft beer revolution has brought this beer back from the brink of extinction, with many breweries producing their own interpretation of the style.

This beer undergoes a triple fermentation. Initially soured using Lactobacillus found on the grain, then fermented out using a brettanomyces yeast. Locally sourced blueberries are added once fermentation is near completion and the beer is racked into bottle to re-ferment and condition. Light, tart, refreshing and complex. A perfect beer for the discerning drinker.