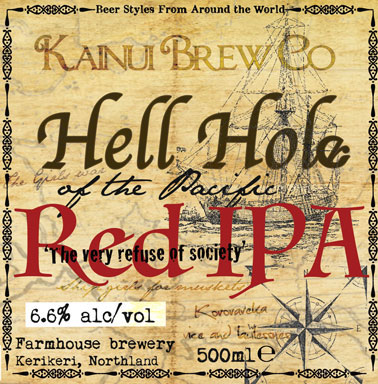 From the early 1820’s Kororareka (Russell) became the biggest whaling port in the Southern Hemisphere. As many as 20 American, British and European ships could be anchored at any one time, with up to 500 crew on board. Grog shops and brothels were the main trade on shore and lawlessness prevailed. Sex was traded for muskets and drunken fighting was commonplace. To the cultured overview the behaviour was abhorrent, earning Kororareka the nickname “Hell hole of the Pacific.”

This Red IPA is like no other…… a blood red malt background is met with hints of manuka, American oak, sea salt and a heavy hand of tropical hops. All of these components culminate in a rampant frenzy of debauchery lust.