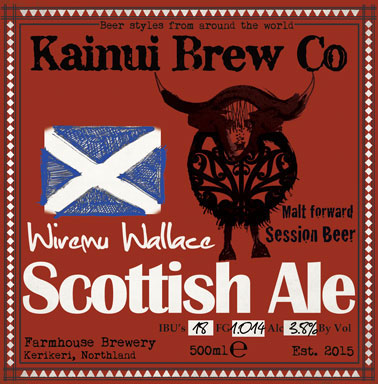 Scottish Heavy (known to many as a 70 shilling, which refers to the tax rate per barrel in the 1900’s). After banning English beer imports in the 1600’s, Scottish brewing boomed, resulting in a peak of 280 breweries three centuries later. Monasteries and women were the primary producers of beer in the early days, prior to the commercialisation of the industry, which lead to a sharp decline in brewery numbers. Following the signing of the Treaty of Waitangi, many Scottish people emigrate to NZ. Among those were brewers whom initiated beer imports from Britain and opened breweries including Auckland’s Albert Brewery, built in 1870.

Wiremu Wallace 70 shilling is a nod to NZ brewers of the past. ‘A celebration of malt’. Caramel and toffee characters sit on top of a smooth clean finish making this the perfect session beer.